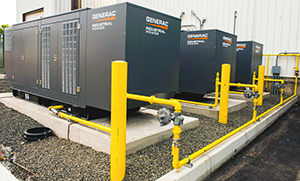 The 2017 Atlantic hurricane season was catastrophic with three major hurricanes making landfall on either the continental United States or U.S. territories. Wide power disruptions from the latest storms have turned up the heat on addressing grid vulnerability and reliability of standby power systems.

Hurricanes like Katrina in 2005 and Sandy in 2012 caused billions of dollars in damages and exposed vulnerabilities in emergency power. A repeat came just last year when, according to the National Oceanic and Atmospheric Administration, four more storms combined caused approximately $265 billion in damage. The 2017 storms saw similar emergency power issues, especially in one case where 14 residents of a Florida nursing home died after the building lost power during Irma. The nursing home did not have standby power to run air conditioning, and the prolonged exposure to high temperatures ultimately led to the deaths.

This has since led to a change in policy in Florida. Generators have been mandated to power air conditioning in nursing homes and assisted living facilities and maintain no more than 81° F temperatures in an area where all residents can congregate. All assisted care, nursing homes and medical facilities must also meet the backup/emergency power codes of NFPA 110 and NEC 700, meaning emergency power must be available within 10 seconds to life safety and critical branch loads if a utility failure occurs. 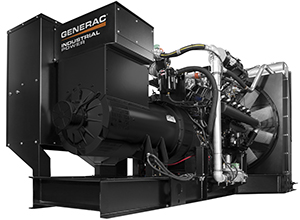 To meet these requirements, many facilities are installing Generac Industrial Power generators. Generac provides a range of backup/emergency power solutions that go beyond NEC and NFPA codes. Administrators, facility managers, and specifiers may need to meet state and municipal codes for generator location and minimum generator runtime standards. For example, emergency generators need to be protected from floods, earthquakes and fire, so those requirements typically rule out most basement placements.

When installing a generator, Generac follows NFPA and NEC standards. NFPA 110 states that for natural conditions, Emergency Power Supply System (EPSS) design should consider the “100-year storm” flooding level or the flooding level predicted by the sea, lake and overland surges from hurricanes. This means locating the generator in an area that mitigates flooding potential.

In 2008, the NEC added section 708, “Critical Operations Power Systems”. NEC 708 reiterated that equipment must be located above the 100-year floodplain. The flood-related requirements call for a number of actions:

While diesel has been the traditional fuel choice, many healthcare facilities are now using natural gas or Generac Bi-Fuel™ generators, upon approval of the AHJ, to meet runtime requirements during times of crisis. Bi-Fuel™ is a great option for healthcare facilities because it provides the best of both worlds — the on-site fuel requirements of NEC 700 and NFPA 110 thanks to the on-site diesel and the benefits of longer runtimes since the generator runs primarily on natural gas. Generac offers fully integrated solutions that are the only EPA-compliant generators straight from the factory in both the 500kW and 600kW nodes. These units can also be paralleled to accommodate even larger applications.

Natural gas generators are also being specified for many healthcare facilities, as the permitting requirements are easier. In addition, more AHJ’s are now considering the natural gas pipeline network to be an acceptable alternative to on-site fuel storage, as the strong underground natural gas infrastructure is rarely impacted by weather or other crisis events. According to a 2013 report by the Massachusetts Institute of Technology (MIT) Lincoln Laboratory, natural gas distribution systems operate at a reliability rate exceeding 99.999%, with the exception of seismically active areas. Incidentally, that makes the natural gas distribution system approximately one-thousand times more reliable than a single-engine generator set, which is typically assumed to be 99% reliable. This allows many AHJs to accept it as meeting the code requirements related to having a reliable fuel source. 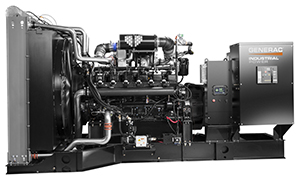 Finally, natural gas generators avoid the fuel supply and maintenance issues inherent in diesel-fueled systems. NFPA 110 states that diesel fuel tanks that are subject to temperature variations can experience accelerated fuel degradation, especially if the tanks are outside and above ground. The presence of water can lead to microbiological contamination and growth, which in turn can lead to general or pitting corrosion of steel tanks and components, possibly resulting in filter plugging, operational issues or a hydrocarbon release into the environment. NFPA 110 also requires diesel fuel to be tested annually and remediated as necessary.

Beyond a push for new and improved emer­gency power systems, there’s a growing focus on improving their functionality and reliability. A National Public Radio report that aired in the wake of the Florida incident stated that one-third of U.S. nursing homes have been cited for failing to inspect their generators each week or to test them monthly; 1,373 facilities were cited more than once. Generac’s innovative Modular Power System (MPS) can provide the large power output needed for hospitals and bigger healthcare facilities while offering the benefits of redundancy, scalability and resiliency through integrated paralleling. In the unlikely event that a unit is offline, the other generator(s) will still support life safety systems. Generac’s MPS approach does not require dedicated switchgear sections. Future expansion generators simply tie directly to the generator bus. Since the paralleling is already built into the generators, the MPS system fundamentally has greater flexibility for growth, requires less electrical room space and reduces initial capital cost. 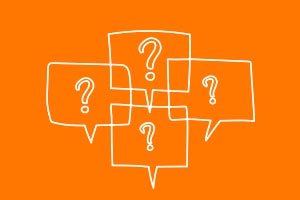 Electrical engineers must consider many factors when designing emergency power systems. Safety, maintainability, code compliance, and economics play crucial roles in determining the topology of an emergency system for a critical facility. Specific requirements for emergency power vary based on building occupancy type, facility use, and critical function.

When designing generator systems, engineers must ensure that the generators and the building electrical systems that they support are appropriate for the specific application. They must make decisions regarding generator sizing, load types, whether generators should be paralleled, fuel storage, switching scenarios, and many other criteria. Emergency power systems provide power to ensure that life safety systems and critical equipment can operate during a power outage. NFPA 70: National Electrical Code (NEC) Article 700: Emergency Systems defines the category that applies to emergency generator power sources.

The May 4, 2017, “Critical power: Emergency power” Webcast presenters addressed questions not covered during the live event. The experts are:

Question: Are fire pumps required to meet the requirements of NFPA 70-2017: National Electrical Code (NEC) Article 700, in addition to Article 695?

Tom Divine: NFPA 110, 2016 edition, Paragraph 5.1.1(3) allows natural or synthetic gas as a fuel source for generating systems. The exception to 5.1.1 requires onsite fuel storage, with automatic transfer to the onsite supply, for Level 1 systems where the probability of fuel delivery interruption is high. A Level 1 system is one whose failure could result in the death or serious injury of a human. In this context, a high probability would be, in fact, a small chance of interruption.

In the 2017 edition of the NEC, Paragraph 700.12(B)(3), prohibits the generator for an emergency system from relying strictly on a public utility system for its fuel supply. The exception allows an AHJ to determine or assess the likelihood that the utility electrical supply and the offsite fuel delivery system will fail simultaneously, and, if that probability is, low, to permit the use of other than onsite fuels to serve the prime mover.

In practice, these requirements are quite similar: both require onsite fuel storage, unless a determination has been made that offsite fuel delivery is reliable enough to be acceptable to the AHJ as the sole source of fuel for the alternate source.

Question: How can we classify mission critical projects, if we are not required to have coordination protection?

Padilla: The reliability of mission critical project is not regulated by the AHJ or the NEC. Selective breaker coordination is a requirement that needs to be discuss with your owner. There are several standards that recommend breaker coordination, such as Uptime Institute and TIA-942-A. Remember, unless requested by you (owner), these are only recommendation or good practices, not a requirement of the AHJ.

Divine: The original draft of proposed NEC Article 585, which later became Article 708 in the 2008 NEC, carried a fine print note (FPN) with a fairly extensive list of candidate facilities. That FPN was deleted from the final version, ostensibly out of concern that it would be interpreted as a requirement that all such facilities be classified as critical operations areas requiring a COPS. Under Article 708, the NEC describes installation requirements for a COPS, but doesn’t determine when a COPS is required. That determination is left to other codes, statutes, or determination by a governmental authority. Here’s the list of candidate facilities from the draft of Article 585:

Question: Should a generator-mounted circuit breaker be directly connected to the same size main breaker within a building? Do these two breakers need to be selectively coordinated because the operation of either breaker will result in the same outage?

Question: Can you install the emergency generator and the automatic transfer switch in the same room? 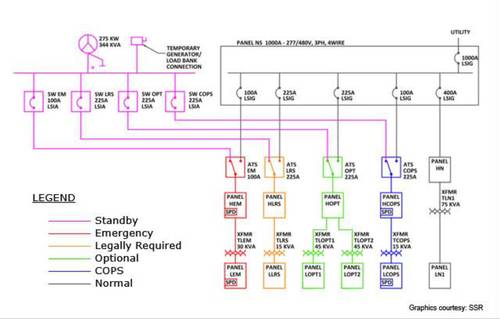 Divine: NFPA 110, 2016 edition, Paragraph 7.2.1, calls for the emergency power supply (EPS), which covers the generator(s), to be installed in a separate room for a Level 1 system. Paragraph 7.2.1.2, though, specifically allows installation of components of the emergency power supply system (EPSS), which includes transfer switches, in the room with the EPS. A Level 1 system is a system whose failure could result in loss of life or serious injury to humans. In the 2010 edition, currently enforced by the Centers for Medicare and Medicaid Services for health care facilities, that permission appears in Paragraph 7.2.1.

Question: What is the level of selective coordination required for an NEC Article 700.27 system?

Divine: Presuming that the reference is to the 2011 edition of the NEC, Article 700.27 requires that emergency system overcurrent devices be “selectively coordinated with all supply side” devices. Selective coordination is defined in the 2011 edition as, “localization of an overcurrent condition to restrict outages to the circuit or equipment affected, accomplished by the choice of overcurrent protective devices and their ratings or settings.” No specific level of coordination is specified, leaving the interpretation to the AHJ. Some enforced the requirement quite strictly, while others allowed for a measure of compromise between selectivity and other objectives.

The definition in the 2017 edition is more restrictive, adding the text, “… for the full range of available overcurrents, from overload to the maximum available fault current, and for the full range of overcurrent protective device opening times associated with those overcurrents.” That language is generally interpreted as not allowing for any failure of selectivity under any circumstances—a very demanding requirement.