The Use of Natural Gas Generators in Beyond Standby Applications 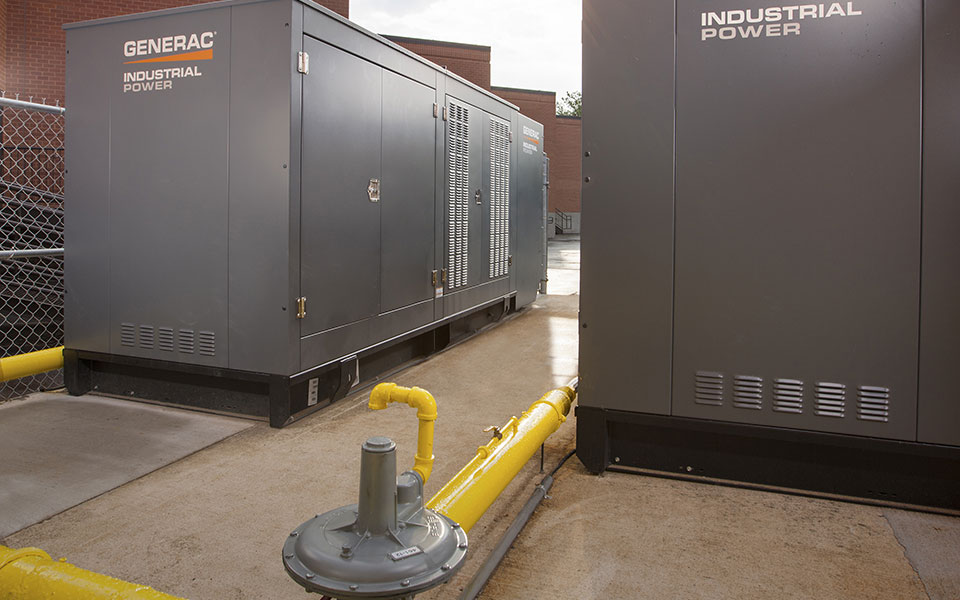 INTRODUCTION
Traditionally, generators were considered a standby source of backup power. Meaning if a utility power failure occurred and the building lost power, the generator would come online and provide backup to that facility. Depending on the size of the generator, it may be backing up the whole facility or only supplying power to the life safety and emergency circuits. The key thing to note here is that in a standby application, the generator is sitting idle, only to be utilized in case of a power failure. In some instances, the duration between two consecutive power failures could be several weeks or months. This article will introduce the concept of using a natural gas-fueled generator in beyond standby applications and it will provide a working knowledge of what can be achieved with the existing technology.

In recent years, concepts such as energy management, distributed energy, micro grids and Nano grids have revolutionized the power systems industry. These concepts, along with several others, have changed the perception of the standby generator, as not only a way to provide the emergency backup to the facilities, but also to utilize their potential to reduce the running cost and generate revenue by maximizing the generator use.

ENERGY MANAGEMENT
We can define energy management as a systematic and organized managing of energy, in our case a natural gas generator or set of generators, in the most cost-effective way to increase the availability of power, achieve overall emission reduction, manage risk and increase efficiency. With the growing needs and increasing energy demand, concepts such as energy management are being utilized more on a daily basis.

The emergency standby generators that are required by the National Electric Code (NEC) can and are used for beyond standby needs. Energy is considered to be one of the top five operating costs for many businesses and strategically managing the energy demand would directly affect the bottom-line cost and expenses. Effective energy management can help to manage the energy costs by utilizing the available means in a smarter way. By utilizing the onsite generator during the peak demand periods, it would lower the overall utility power use and it would result in avoiding high-energy charges from the utility company. In other words, the user who is utilizing their natural gas generator for beyond standby non-emergency applications is getting an increased ROI on their generator.

THINGS TO CONSIDER
Numerous factors must be considered before utilizing a generator in beyond standby applications such as:

Controls and Hardware
Depending on the type of energy management program, the end user may be required to meet specific levels of control and hardware requirements. The experts at Generac can facilitate this process and provide expertise in determining the hardware and controls needs that may be required for your application.

CONCLUSION
Natural gas generator units offer the ability to reduce the user’s overall energy cost while supporting the local utility. Utilities can defer or eliminate the need for costly substation, transformer and feeder upgrades with generation assets can provide a no-risk, no-cost opportunity for organizations to help offset the capital and operational cost of a stationary generator set. Beyond standby applications are best suited for natural gas generators, as costs for achieving diesel emissions compliance in a nonemergency application often exceed the potential benefits.

Muhammad Armaghan is a Product Manager at Generac Power Systems. He is responsible for the Industrial Generator product line. Armaghan has experience working in industrial power generation markets and has supervised several multimillion-dollar projects throughout the United States. These include power plants, healthcare facilities, data centers and municipal projects. Armaghan has also worked closely with consulting and specifying engineers, as well as general and electrical contractors and end users.

The Importance of Load Bank Testing

INTRODUCTION
Load bank testing simulates the designed usage of the generator at the advertised rating located on the nameplate of the unit. It verifies that all primary components of the generator set are functioning properly under loaded conditions. The equipment used to perform a load bank test produces an artificial load on the generator by bringing the engine to an appropriate operating temperature. The key to a proper test is that your generator must be tested at its full output rating. When a generator operates during the weekly or monthly exercise, it runs at a lower load than the unit’s full-rated output ability. Load banking tests the generator’s ability to execute and deliver the required kW during an emergency. Many generator owners exercise their standby generators weekly un-loaded, but rarely test them with building loads, relying on the occasional utility loss to completely exercise the entire back-up power system. Manufacturers do not recommend this practice.

CODE REQUIREMENTS
Load bank testing is mandatory for several applications. A number of regulatory oversight conditions and code requirements are mandatory for emergency power generation systems where failure of equipment could lead to loss of human life, according to NFPA 110 Level 1. Both the National Fire Protection Agency (NFPA) and the National Electric Code (NEC) have mandates pertaining to load bank testing of emergency generators.

The critical operations power systems (COPS) requirements of the NEC emerged through the U.S. Department of Homeland Security after several disasters in the early 2000s. NEC 708 states a commissioning plan for on-site backup generation is required, so is baseline testing and periodic witness testing, as well as a documented preventive maintenance program, written accounts of testing, and the method of testing maximum anticipated load conditions on all critical power systems.

Joint Commission, a healthcare accrediting organization, requirements encourage hospitals, health centers and nursing homes to go beyond local, state and national electrical codes. Periodic testing is required for all healthcare facilities, preferably under higher loads than the 30 percent minimum. At least once every three years, all healthcare facilities are required to exercise the power system under the facility’s load and full emergency conditions for at least four hours.

The frequency of the tests wholly depends on individual requirements and industry regulations. Codes and standards vary on location and application, it is important to check with your local Authority Having Jurisdiction (AHJ) to make sure you are meeting load banking and maintenance requirements.

TYPES OF LOAD BANK TESTING
Load banks can be defined as a self-contained, unitized, systematic device that includes load elements or steps. The following types of load testing are available:

Resistive Load Bank Tester: Individual resistor load banks provide the load to the generator. Power resistors convert electrical current into heat. This testing is used to test the engine to its design capacity.
Reactive Load Bank Tester: Generators that primarily supply power to motor-driven equipment and capacitors may be tested by reactive load banks. This testing adds apparent power (VA) to the load and fully tests the alternator performance as well as the engine.

HOW LOAD BANK TESTING WORKS
When a test is executed, an artificial load is placed on the generator. The test is timed and progressively increases the kW load. Each time the kW is increased, the engine and alternator parameters are recorded. The important thing to note with load bank testing is actually making sure that the system operates to full capacity with either your engine output or your alternator output depending on if you’re testing at a 0.80 (reactive test) or 1.0 (resistive) power factor.

The recommended steps to follow for the load bank test include:

Both natural gas generators and diesel generators need to be load bank tested. Load bank testing helps burn unwanted moisture out of the exhaust system, lubrication system, and engine. Performing the test on a gaseous generator helps burn unwanted deposits out of the engine when it gets operating temperature. Testing also demonstrates that the unit is operating at rated capacity and will isolate any weakness in the system that can be corrected before utility power outage occurs. This ensures 100% uptime when needed. While you have the engine operating under load, it is important to make sure that the air-fuel mixtures are operating to the manufacturer’s specifications. During the test, you want to make sure that your generator is not operating too lean or too rich during your run cycle. Load bank testing is a great way to do that. Testing the gen-set at no load, as in a weekly exercise, problems may not present itself until it is loaded on your facility.

When a diesel engine powered generator is not used frequently or only run on light loads, it can be prone to experiencing unburned fuel and soot buildup in the exhaust system. This is called wet stacking. Wet stacking occurs when the generator does not reach designed operating temperature, allowing carbon and unburned fuel to build up in the exhaust system. Wet stacking can compromise the reliability of the diesel generator. It is recommended diesel systems be load tested with a portable load bank for a minimum of two hours annually. The full load operation created during load bank testing will burn off excess soot and moisture to reduce the impact wet stacking will have on the generator system.

Load bank testing is a thorough and economic way of putting the generator to the test without using the customer’s facility and putting their critical loads and processes in jeopardy. Load bank testing ensures peace of mind after the fact with knowing the unit was fully load tested. A load bank test will indicate:

After the load bank test, it is recommended to complete a transfer test. This test can be initiated by turning off the power load (opening the circuit breaker feeding the ATS) or initiating a test sequence at the ATS. Both methods will allow you to test the start and transfer time of the system by transferring load over to the generator. By performing this test, you can determine that the unit will carry the site load. The transfer test examines the entire system, not just the generators. It ensures that the generator set and system function properly and are ready for any
power outage event.

CONCLUSION
Emergency generator sets are becoming required pieces of equipment at some facilities, such as assisted living facilities and data centers, and they are becoming more commonly seen. With an increase of dependency on backup power systems, proper testing and maintenance is becoming extremely important. A good maintenance program, that includes completing the manufacturer’s recommended service and regular load bank testing, should be a standard practice for any customer’s back-up generator system to ensure long life and reliable service that is ready to operate when electrical utility power is out of service.

Generac Industrial Power designs, engineers, and manufactures products in Wisconsin. From start to finish, they have the hardest working team in the business, making sure you have the best available product on the market. They take pride in the details. Every step of the process is completed with the customer in mind. Generac’s team designs market leading innovations and builds each part, making sure it works when you need it most.